We’ve had house rabbits in the past (Beau lived till he was 8 and Lola lived till she was 7) and our kids have been asking to get more rabbits for a while now.  On Sunday we went to the PaSRBA Convention in Lebanon, PA and the kids chose 2 rabbits to bring home.

Noah chose a broken black Mini Rex buck and named him Fastnacht (fosh-not).  For anyone not familiar with what a fastnacht is, click here.

Hannah picked out a black otter Netherland Dwarf doe.  She first picked the name Blackie, but then decided on Black Rock.  I guess Blackie wasn’t creative enough for her! 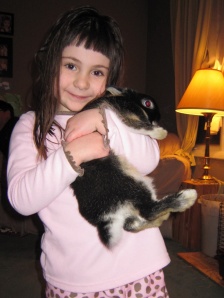 They are each 3 months old and in separate cages until they can visit the vet, but here’s a cute picture of them together when we first brought them home.