I am sitting here going through sections of our website, and I come to my blog drafts page.  Imagine my surprise to find this post that I thought I had published in 2014!

Enjoy these lamb pics while we wait patiently until April when this year’s lambs will be born. 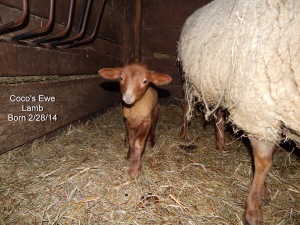 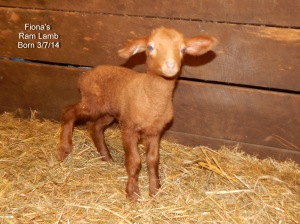 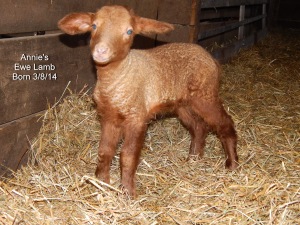 Because of the extreme cold weather that winter and the icy conditions we kept the ewes and lambs in the barn until the ice melted and the youngest lambs were a couple weeks old.

It was great to watch them enjoy their new-found freedom when we finally were able to bring them outside.

They had been outside for a couple weeks and were racing a few times every day.  I don’t think I’ll ever get tired of watching them!

Here’s a short video of our lambs from this afternoon. Enjoy!

I had to work this past Saturday and Sunday so Dave figured that all the lambs would be born while I was gone.  Well, only 4 were born, but right after I went to work Saturday morning Annie had her twins!  I left around 7:30am and Dave called me at 8:30am to tell me there was a lamb in the big stall when he went in to feed.  He got the lambing jug (pen) ready and moved Annie lamb to the smaller space to bond and continued feeding.  He checked back and Annie had 2 lambs in the jug with her.  Dave said she was so quiet that he didn’t even hear her pushing!

Dave’s 1st solo lambing couldn’t have gone more smoothly.  The 13 lb ram lamb was born first, followed by the 10 lb ewe lamb (no wonder she groaned every time she was laying down!).

When I got home from work Sunday afternoon Abigail was the only ewe laying down in the stall, but she got up when Dave brought their hay and grain in.  During our dinner, I noticed on the barn monitor that Abigail was the only one not really eating.  She was standing to the side of the stall by herself and only half-heartedly munching on hay.  Her ears were droopy and she had a look of concentration on her face.

I went out a couple of times to monitor her labor after dinner and was concerned that even though she was pushing I hadn’t seen a water sac or feet.  Warning …. graphic birth description …. may not be for the squeamish.

I “gloved-up” and found the sac was about to emerge.  After a few more minutes and as many pushes I saw a foot.  A single, rear foot.  Okay, I’ve done this before.  This is a breach birth, but at least the lamb wasn’t in the full breach (or butt first) position.  I felt to see if only one leg was presenting and found the other leg next to the 1st, but with the foot bent backwards.  That was easy enough to correct.  Once both feet were out Abigail started pushing again, but with no progress.  I examined again and found that the legs were bent, so I gently straightened them out and she pushed again, but  then got up to find another position.

I was getting nervous here because once the umbilical cord is pinched in the birth canal the lamb will instinctively breathe.  If the lamb is in the breach position when the cord is pinched it could try to breathe while its head is still in the mother and inhale birth fluids.  This is a concern because any aspirated (inhaled) birth fluids can cause pneumonia in the lamb.  Abigail laid down again and with each of her pushes I pulled the lamb’s legs side-to-side and downwards.  I only pulled with her pushes to lessen any tearing or damage to Abigail.  The ewe lamb came out easily and I quickly wiped any fluids from her nose and mouth so that she could breathe.

We waited for a while before moving her to the lambing jug to determine if she was going to have another lamb, but she ended up having just 1 ewe lamb that weighed 10.25 lbs.

This morning (Monday) was the 1st day of Noah’s Spring Break so I got to sleep in till 7:30!  I heard lots of baa-ing over the barn, but figured it was just because Annie and Abigail were across from the rest of the ewes and they were “talking” to each other.  I got outside around 8 or so and discovered that Erin (one of our 2 first-time moms) was licking a nearly-dry lamb!  She was almost under the video camera and out of view on the screen, which explains why I didn’t see a lamb on the monitor.  I brought Annie and her twins out of the jug and carried Erin’s lamb (with her following) into it.  The ewe lamb weighs 10 lbs and Erin is very interested in her and standing still for her to nurse. 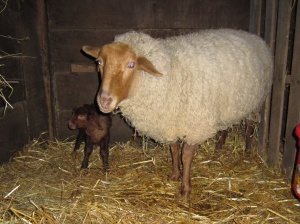 We have bred our sheep and had successful lambing seasons for 6 years. This fall breeding season, however, turned out to be a learning experience for us.

On October 13th, we took all the ram lambs away from the ewes because we saw some *frisky* behavior going on.  We had decided to put our rams in with the ewes in early November so that we wouldn’t have lambs until April.  We separated our rams so that Ezra and Camille we together in one field (Camille is our only ewe that Ezra is not related to), and Raulie was with Annie, Abigail, Bertha, Beatrice, Erin and Esme.  We put all the lambs in a 3rd field with our wether BFL and goat.

{Some background info on sheep breeding… We put breeding harnesses that hold crayons on our rams each breeding season.  When the ram mounts the ewe the crayon on the harness rubs on her rump.  We then have  visual evidence of breeding and can mark our calendar accordingly so we can calculate when any lambs will be born.  Sheep cycle ever 14-18 days, therefore, you should change the color crayon in your ram’s breeding harness every 14-15 days.  If a ewe is marked with the second color, this means she did not conceive during the 1st cycle.  Any ewe that did conceive in the 1st cycle will not cycle again and the ram will not have any interest in mounting her.}

After 2 weeks of rams and ewes together, not one of the ewes was marked with color on their rump.  We usually breed in October, I started to wonder if we missed our window of opportunity, but I didn’t really think that was the case because we have had rams breed ewes though December.  Since none of the girls were marked, I didn’t bother changing crayon colors for their next cycle.  Two more weeks with nothing, and during that time I started thinking that we left the ram lambs in with their dams too long because the adult rams were not mounting the ewes at all.  You’ll remember that we did see some frisky behavior earlier in the fall, but we didn’t witness any actual breeding.

Now that we’re in the New Year, we are anticipating a surprising lambing season because we think our ewes are pregnant, but we don’t have any idea when they are due.  We guess that any lambs will be born BEFORE mid-March since we took the ram lambs away from the ewes in mid-October.  Unfortunately this lamb crop will not be able to be registered, but we will look forward to the lambs anyway!!

Hannah woke up at 6 this morning… the 1st time since we changed the clocks that she hasn’t slept in.  I got up with her but I really wanted to go out to the barn.  I heard lambs baa-ing over the baby monitor and wanted to see what was happening out there.  I didn’t want to bring Hannah out in pj’s so I waited till Grandma woke up.  Abigail and her lamb were fine, Rosy and her twins were fine.I put Annie in her lambing stall yesterday because I thought she looked ready to go and, sure enough, she  had twin lambs cuddled up to her.  They were mostly dry so I gave all 3 moms some hay and went in the house for breakfast.  I weighed and checked them out afterwards.  The ewe lamb was 9.75 lbs and the ram lamb was 11 lbs.  We already have more ewe lambs than we did last year!

Last night Dave couldn’t sleep because of his cold so he went in the living room and watched some tv.  Well, at 12:45am he woke me up because one of the ewes went into labor and he could hear her pushing over the baby monitor we keep in the barn.

We got out to the barn pretty quick with my lambing box and discovered it was Abigail who was in labor.  We moved her into a smaller lambing stall (or jug) and persuaded Rosy and Annie to return to their “ladies in waiting” stall.  We got some things together and sat by the straw bales to wait.  Midnight and Tiger were very happy that we finally decided to come join them in sleeping in the barn.  🙂  Not much happened so we decided to go back to sleep for 30-45 minutes and do another check.

At 2:15am, I mean 3:15 daylight savings time, we went out again because we still heard pushing.  I checked and only saw 1 hoof….not good.  I felt around and found the other foot quickly.  It was bent at the “ankle” and corrected easily, but the emerging legs didn’t look like front legs.  I felt around again and found a tail….not good.

The next time Abigail laid down to push, Dave knelt down and held her for me.  I attached my lambing cord to the lamb’s legs and, with each contraction, pulled.  Poor Abigail was a trooper through the delivery.  Dave said she chewed on his jacket when she was pushing.  We had to get that baby out quickly so that it didn’t start to breathe while still in the birth canal.  Pneumonia can develop when fluid gets in the lungs.

We got the lamb out – a ram – and cleared its nose…after a little chest rub he started breathing and shaking his head.  What a big boy!  After mama cleaned him off and he stood up I weighed him… 12lbs!  No wonder he didn’t have a twin!

I finally got back to bed at 4:15 daylight saving time.  What a night to be out in the lambing barn!  And I had to teach Sunday school this morning, too!  Whew! 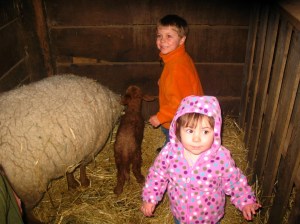