Do you flush your ewes before breeding?  Many shepherds do.   Some don’t.  Some shepherds consider flushing an “intensive farming” practice and not natural for the sheep.

~~ Before I go any further, let me explain what the term flushing.  Flushing is the practice of increasing feed given to the ewe before breeding.  This is usually started 2 weeks or so before introducing the ram to the ewe flock and continued for about 45 days (tapering off gradually at the end).  The ewes can be supplemented with grain, hay or by moving to a better pasture.  The increase in nutrition prior to breeding gets the ewes into good body condition that is more nourishing to fetus(es).  It can also result in the ewes coming into estrus (heat) together and their bodies releasing more than 1 ova (egg) when in estrus.  If the ewes are overweight before breeding, flushing usually has little or no effect. ~~ 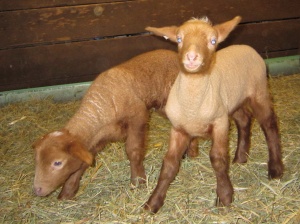 I’ve flushed my ewes and also bred my sheep some years without flushing to see if there is any difference in my lamb crop.  Since this year (2013) is only our 7th lambing, I don’t have years of data to use, but the couple of years that we haven’t flushed have produced more single births than years that we did flush the ewes.

The decision to flush your ewes or not depends on several factors: feed/hay availability for feeding ewes carrying multiples, pasture space for ewes and growing lambs, and customer-demand for lambs.  Whether you raise your sheep for fiber, meat or the show ring, you don’t want to have more lambs than you can sell or adequately keep.  We often have a waiting list for lambs, so after looking at my data, I will be flushing my ewes from now on.