Keystone International Livestock Exposition. We went to Harrisburg on October 2nd to see the National Tunis Show (and all the other animals). Hannah loved all the animals except for the pigs, which Noah loves for some reason. When we were looking at the Tunis sheep she decided she wanted to get in the pen with the “babies.” I told her, “no,” and she showed everyone how well she can fake-cry.

Noah was going to help hand out awards to the winners, but the show was running late and he and Hannah were getting hungry and tired. He gave out a few awards then we headed home, making a stop at Perkins for ice cream on the way. 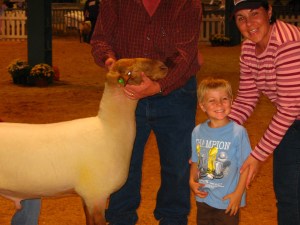 We also got to see Noah’s poster in person at the show…very cool! Oh, and the grand champion ewe at KILE this year was a Tunis ewe from Massachusetts. Yay!