We woke up on Saturday, February 25th, and checked the barncam – there was a newborn lamb in the maternity stall!  Annie labored quietly and had the single lamb already cleaned off and it was standing up.  (Annie’s mother, Star, had delivered her lambs right under the baby monitor without us hearing a peep from her.)

We headed out to the barn and I was first struck by how wrinkled his skin appeared.  Then it hit me … he had no wool.  I had heard about this – in 2016 a woman on the Facebook group Goat Vet Corner posted about one of her goat kids that was born with no hair.  The vets on the page suggested he may have a condition called hypotrichosis, which is defined on wikipedia.com as “a condition of abnormal hair patterns – predominantly loss or reduction.”  Merriam-webster.com defines hypotrichosis as a “congenital deficiency of hair“.

Annie’s ram lamb was a big boy, weighing 11 pounds.  He had normal hair on his legs and tail, but very little hair on his head and no wool or kemp fibers on his torso.  We eventually named him Kyle so we wouldn’t have to call him “the lamb with no wool” or “the bald lamb”.

As I moved the pair to a jug (a small pen for the mama and lamb/s to stay for a couple days) I noticed that the Kyle’s skin was almost sticky.  I am guessing it was residual amniotic fluid or still damp from 5 months in utero, since his skin felt normal after a couple days.

Once he was mostly dried off, we put a lamb sweater on him to help him stay warm.  We were concerned about him the first day and weren’t sure if he’d make it.  He had a bit of difficultly finding Annie’s teats to nurse and he slept flat out on his side and seemed to have trouble getting up.  We ended up dressing him in a smaller sweater so he wouldn’t step on it, and went to check on him repeatedly to help him nurse.

By day 2 Kyle was eating and acting like a normal lamb, although he shivered a bit – remember it was February.  We hung a heat lamp on one side of the jug for him, which he slept under.

On day 3, we band our lambs’ tails and apply ear tags.  Now, Annie was almost 10 years old at this point and had had lambs 8 other years.  She’s always been a great mama and cared for her lambs, but as I handled Kyle she became very alert and every time I had my hands off of him she would pull him to her with her nose and nudge him behind her.  I found this surprising because many times when a ewe finds something “off” about her lamb, she will reject it.

After getting banded and tagged, the lambs and their mamas go back into our large maternity stall to join the other ewes.  Annie kept a watchful eye on her lamb as he ran around with the 2 other lambs that were born a couple days before him.

Because of the temperatures in PA in February and early March, and because Kyle had no hair to protect his ears from frostbite we bought a metal drum and made a lamb warmer for him.

The drum has a hole in the top for the heat lamp and the cord to fit through so it is stable and an opening on the side for the lambs to enter.  As you can see, Kyle wasn’t the only lamb to enjoy the warmer! 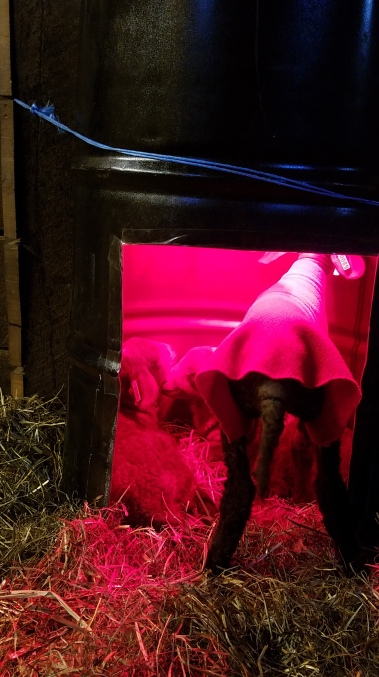 Stay tuned for more posts on Kyle!  I will explain more about his condition and describe how he’s been growing the past few months.  Questions?  Please post them below and I will answer them as best I can.  I may also address them in future posts.