If you’ve been following our farm for a while you probably know about Kyle, our lamb that was born without wool on his body. He was born on February 25, 2017 to Annie and sired by Hurley.

Over the summer I decided I wanted Kyle to move south because I didn’t want him to suffer through our cold Pennsylvania winters. I found a wonderful woman in Texas who fell in love with him from my various Facebook posts about him, and in October 2017 he moved to Texas! God provided people who were moving other sheep from Virginia to Texas and agreed to bring him along. I drove him to Virginia where he was cared for by a friend and fellow Tunis breeder until the couple arrived to pick up their sheep (and Kyle).

Kyle arrived safe and sound in Texas and settled in right away.

He made friends right away with his new owners dog …

and became buddies with her cow.

He got a nice sweater to wear when temperatures turned chilly. 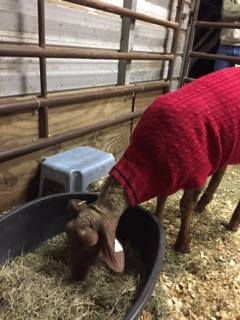 The winter of 2017-2018 brought snow to parts of Texas that hadn’t seen snow in 30 years! I joked that Kyle brought the cold weather with him. He was prepared for the weather with his new coat to keep him warm, though.

I keep in touch with his owner and Kyle turned 2 years old last month. He’s such a big boy and looks so happy soaking up the sun!

His owner also tells me he has a mischievous side and sometimes joins the donkey in chasing the cat up the fence posts.

We learned so much from Kyle being born with hypotrichosis, and I’m so glad that I met his owner and we were able to transport him to Texas. He’s been a blessing and I hope he has many healthy years ahead.

~all photos are from Kyle’s new owner~